Spanish Master at Spanish Place for Patron Saint of Spain

For the feast of St James (celebrated on Sunday 24 July) at the wonderful church of St James, Spanish Place, Victoria's Missa Laetatus Sum was sung.  The choir of St James has been singing Victoria's Mass settings throughout the year in commemoration of the 400th anniversary of the great composer's death.

It just so happened that the main celebrant, at the invitation of the clergy of St James, was Archbishop Mennini, Apostolic Nuncio to Great Britain.  Here are a couple of photos of His Excellence travelling to Buckingham Palace on 2 March this year to present his papers to Her Majesty: 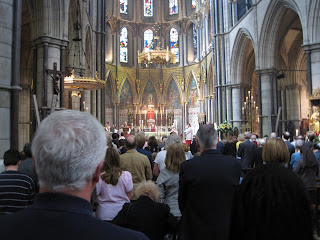 As for the Order of Service, it was typical of the liturgies at Spanish Place:

Short extract from Gloria:
COLLECT (for the Feast of St James) but for the sake of comparison, the collect for the 17th Sunday in Ordinary time:


God our Father and protector,
without you nothing is holy,
nothing has value.
Guide us to everlasting life
by helping us to use wisely
the blessings you have given to the world (1973).
O God, protector of those who hope in you,
without whom nothing has firm foundation, nothing is holy,
bestow in abundance your mercy upon us
and grant that, with you as our ruler and guide,
we may use the good things that pass
in such a way as to hold fast even now
to those that ever endure (from 2012).