Of Ordinations and First Masses

The procession began with the hymn All Creatures of Our God and King.  As the clergy approached the Sanctuary, the choir sang the Introit Os iusti meditabitur.  The altar, adorned with seven candles in a so-called ‘Benedictine’ arrangement, was then incensed by the Cardinal.


The Kyrie was sung by the Choir (Palestrina, Missa Papae Marcelli).  The Gloria was sung by all in English (an Australian setting by Paul Taylor, Mass of St Francis, which is fast becoming the Mass of choice throughout the Antipodes, replacing in that regard the previously ubiquitous Smith Mass Shalom).  For large Archdiocesan events like ordinations and the Chrism Mass, the use of an English congregational setting is a common departure from the normal practice at Solemn Sung Masses at St Mary’s (usually the Gloria will be a Latin polyphonic or chant setting).


The Responsorial Psalm, when not replaced by the Gradual, is usually sung by the choir, but was on this occasion sung by a cantor.  The Alleluia was a simple 'triple' setting (), with the verse sung by the choir (whereas the usual practice at the Solemn Sung Masses at the Cathedral is to sing the Alleluia from the Graduale). The Gospel was proclaimed by a deacon, and the opening and closing parts were sung. The candidates were presented and then the Cardinal preached the homily.

The promise of the elect was made, and then the Litany was led by two seminarians. The congregation positively roared the responses, giving credence to the view that Catholic congregations cope best with simple chant melodies (and this was unaccompanied congregational chanting at its very best, rising ever upward to the Cathedral's vaulted ceiling and far beyond)!

The music during the laying on of hands was the chant Iam non dicam sung by the Cathedral Choir. 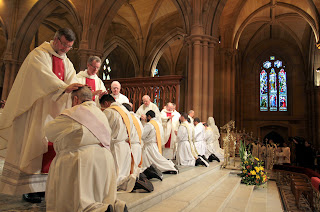 After the Prayer of Ordination the new priests were vested in stole and chasuble as the Choir sang Tu es sacerdos. 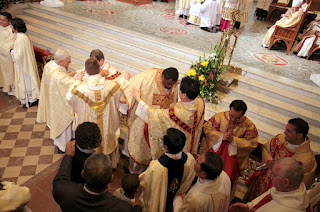 Then the new priests' hands were anointed with the Sanctum Chrisma, and then there was the presentation of the bread and wine. 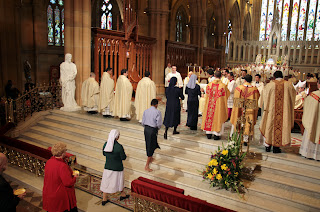 During the kiss of peace, folk/devotional music was sung by members of the Neocatechumenal community to the accompaniment of, inter alia, guitars. Immediately following this the Choir exquisitely sang the motet In spiritu humilitatis by Croce (written for the Basilica di San Marco, where Croce had been a chorister and also the choirmaster, and perfectly in place at the Basilica of Mary, Help of Christians in Sydney), which provided a most dramatic contrast between music that is instantly recognisable as sacred in nature and that which is manifestly more difficult to distinguish as such. 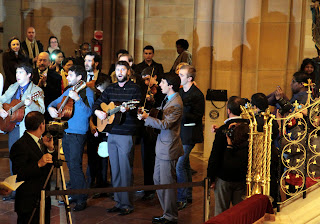 The Sanctus was the English Mass XVI setting, found in the Roman Missal, Third Typical Edition (whereas again the normal practice at the Cathedral is to sing a Latin chant setting), and the Roman Canon was used.

The Mystery of Faith was the Missal chant setting number one (We proclaim your Death).  The Doxology was sung, as was the Lord’s Prayer, in English, using the Australian tone. The Agnus Dei was from Missa Papae Marcelli, Palestrina.

Then followed the Communio Beatus Servus, and a post-Communion hymn In faith and hope and love. The organ postlude by Mulet was played by the director of music of Parramatta Cathedral.

Felicitations to all the ordained, and may God cause these men to be possessed of an unwavering zeal for evangelisation! 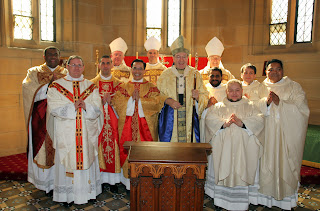 
The first public Mass of the Rev Joane Epeli Qimaqima was a joyous affair.  Held at 9.30 am on the Sunday Following the Ordination, the church of the Sacred Heart in Cardinal St, Mosman, on the Lower North Shore of Sydney (and in this author's local parish), was filled to capacity. As it was at the Cathedral, the altar of this church was arranged in the so-called Benedictine fashion, with six altar candles and crucifix. 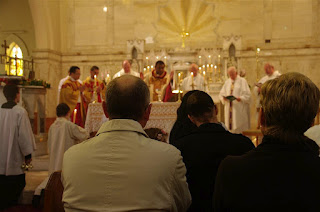 There was incense, and the music, largely familiar in the parish, was provided by local musicians, including a Tongan choir that sang during a solemn procession of the Word (Fr Epeli is Fijian).

Fr Epeli sang most of the celebrant's parts of the Mass, from the Missal, and most beautifully too. In the afternoon, Fr Epeli celebrated Mass in the Fijian language at Villa Maria Church, Hunters Hill. 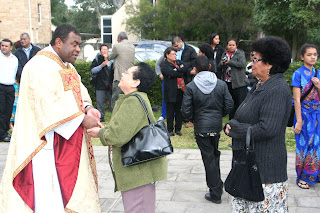