For the God Who sings

Sydney is extremely lucky to have not one, but two excellent classical music radio stations - ABC Classic FM (the public broadcaster) and Fine Music 102.5 (a community radio station formerly known as 2MBS FM).

On the former this Sunday evening 17 March 2013 at 10.30 pm is a programme of lenten music, the bulk of which will be taken from the new CD of the incomparable Westminster Cathedral Choir - Miserere (which I briefly reviewed as part of this earlier post).  The parts that will be played are:

No offence to BBC Radio 3, but all they could manage to play from Miserere when they reviewed it during the course of a three hour programme was a thirty second excerpt from the Malcolm Miserere mei, Deus, followed by a meagre one sentence comment about the singing.  Poor form.

Tune in to 92.9 FM in Sydney to hear the broadcast of this superbly sung liturgical music.  For other frequencies, click here.  Listen online here.

Of course, do not forget to purchase the CD afterwards.  My favourite online shop is the UK Presto Classical.  If in Sydney, drop into Fish Fine Music, or if in Melbourne Thomas' Music (I have no affiliations with any of these businesses). If in London, try the Cathedral's own gift shop, Gramex or HMV Oxford Street, if it is still there :-(.  (I have watched in horror as classical music shops in Sydney and elsewhere have disappeared.  First the superb HMV Pitt St Mall closed.  Its extensive classical music stock was purchased by the department store Grace Bros, now Myer, which also had a dedicated classical music room, until that too vanished into thin air.  Then Michael's Music Room at Town Hall Station shut its doors, followed by one of the two Fish Fine Music shops.  The classical music shop in Manuka, Canberra, whose name escapes me, also closed recently - I discovered this one morning after Mass at St Christopher's Cathedral - a wine bar is now in situ.  Support the remaining independent classical music shops, otherwise they shall all disappear for good!)

Our local libraries are doing their part to disseminate excellent music - this picture from Stanton Library in North Sydney, close to my humble abode, where the procurement officer has fine taste: 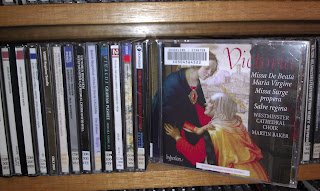 In fact, you should be able to spot three other Westminster Cathedral Choir CDs in the photo as well.  All the libraries that I have visited in northern Sydney have extensive classical music collections, and perhaps the biggest collection is to be found at the music library of the Sydney Conservatoire de Musique, part of the unrivalled University of Sydney (although situated right near the celebrated Sydney harbour, the Opera House and Royal Botanic Garden).

A special mention must also go to Hyperion Records - how wonderful that a record company takes the time and risk to publish such important music.  Hyperion has lenten liturgical music well covered now, in Latin and English.  Here is St Paul's Cathedral Choir singing the Lent Prose from the New English Hymnal (the Latin original Attende, Domine featuring on Miserere) on the CD Passiontide at St Paul's: