Midnight Mass: Palestrina with Sackbuts and Cornetts from Westminster Cathedral

Westminster Cathedral Choir sang the Missa Hodie Christus Natus Est for Midnight Mass. From BBC Radio 4 (where you can listen to the broadcast, which will be available for the next 4 weeks at time of writing):


"A Venetian-style First Mass of Christmas with splendid Gabrieli motets and Palestrina's Missa Hodie Christus Natus Est (Today Christ is Born) make for a very special atmosphere as the Archbishop of Westminster Cardinal Vincent Nichols celebrates the First Mass of Christmas live from Westminster Cathedral. The vibrant sounds of traditional sackbutts and cornets played by the vituoso English Cornett and Sackbut Ensemble will echo and re-echo around the cathedral exploiting its unique spacial properties. The service closes with the resplendent brass and organ voluntary: Hodie Christus Natus Est by Heinrich Schutz. The renowned choir of Westminster Cathedral is directed by Master of Music Martin Baker and the organ is played by the Assistant Master of Music Peter Stevens."

What is not mentioned in the BBC's precis, or on the cathedral's music list, is that the Gradual (Tecum Principium) is not the chant Gradual from the Graduale Romanum but rather a truncated version of the Dixit Dominus from Monteverdi's 1610 Vespers! By omitting the Virgam Virtutis Tuae section, and everything past the Tecum Principium In Die section, the same text of the gradual is sung, though not in order. I suppose if you have sackbuts and cornetts, you may as well maximise their use! 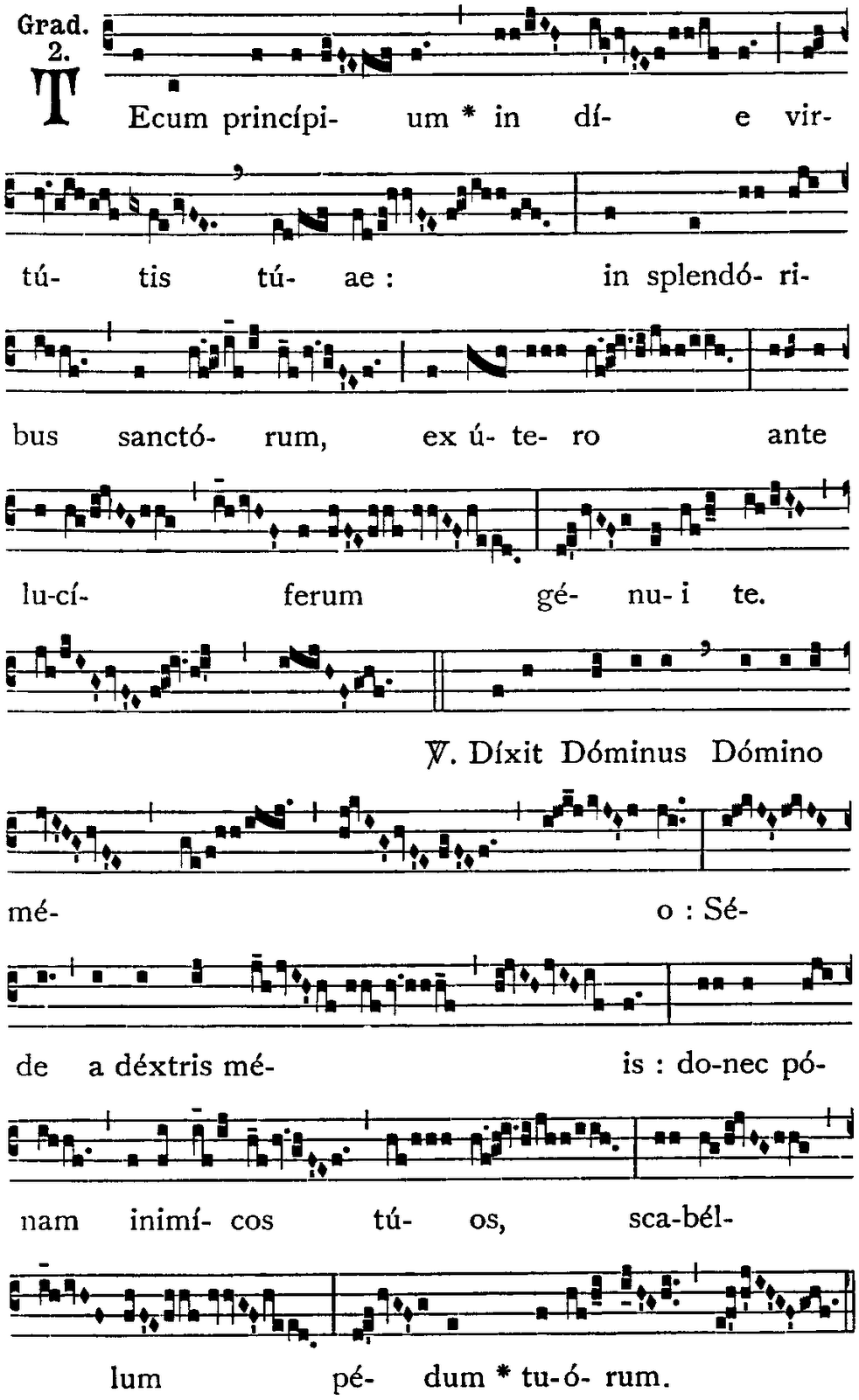 Credo III was interrupted for an extended "Et incarnatus est" (as is customary, to allow people to kneel, though common sense must be brought to bear in the choice of setting) - I am unable to identify where the Westminster Cathedral setting is from, but it is not from the Credo of the Missa Hodie Christus Natus Est).


Update: Westminster Cathedral seems to use this polyphonic setting of the "Et incarnatus est" often (perhaps every year) rather than the "Et incarnatus est" from the ordinary (I suppose this avoids the need to learn two separate prices - for Midnight Mass and Mass of Christmas Day, and there are some settings of the ordinary for which no Credo was composed). See below video from the Midnight Mass in 2001, where the ordinary was the Kodály Missa Brevis. I am pleased to say that I am not the only one to have speculated as to the origin of the polyphonic setting used at Westminster. Perhaps penned by a past Master of Music?

St Mary's Cathedral Choir, Sydney, also had the Missa Hodie Christus Natus Est, with beautiful organ accompaniment, for the Mass of Christmas Day. Interpretation and singing were spot on. For Midnight Mass it was the lovely Malcolm Missa Ad Praesepe with some lively improvisation after the intonation of the Gloria. The Gospel was beautifully chanted, and for once we had the proper tone for "The Gospel of the Lord" (in Sydney there is widespread use of a most curious tone that I've not seen in any books, not even my superseded E J Dwyer Missal, and the new English Roman Missal was not successful in displacing it!)

Wishing a very happy Christmas to one and all.
Posted by Kentish Man at 13:15