The Sistine Chapel Choir - choir to the Pope - last night gave a concert in London, entitled "Super Fundamentum Apostolorum (Upon the Foundation of the Apostles) - A Journey through the Liturgical Year with Traditional Music from Papal Celebrations".

Well, with remarkable speed, the Catholic Church in England and Wales, through one of her humble functionaries, has already provided pictures of the event: 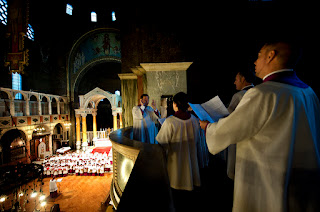 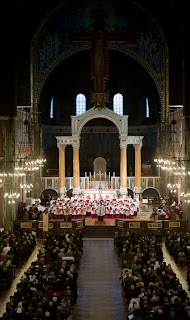 And a blogger - who was present at the concert - reports:


"Mgr Massimo Palombella [present director of the Cappella Sistina] addressed those present – the Cathedral was packed and many had to stand throughout the concert. After praising Westminster Cathedral Choir and its director, Martin Baker, Mgr Palombella said that the Pope desired a greater collaboration between his choir and the choirs of Westminster Cathedral and Westminster Abbey. It seems that the Holy Father had been impressed by the music he had heard in London during the 2010 Papal visit. In fact, Palombella went on to say, through an interpreter - Richard Rouse, who organised last year’s bloggers conference at the Vatican - that the Holy Father had “pushed” the Sistine Chapel Choir to collaborate with the English choirs. He also said that the Pope had expressed a desire to see ecclesiastical music used as a means of fostering true ecumenical ventures – Benedict XVI has invited Westminster Abbey Choir to sing during the Papal Liturgies for this year's Feast of St Peter and St Paul."

Will there be a video to follow?
Posted by Kentish Man at 13:44