For news and analysis of the Installation today of the Most Reverend Mark Coleridge as the 6th Archbishop of Brisbane, see:


Watch the Mass Again, or Read His Grace's Homily

You can view the whole Mass from St Stephen's Cathedral "on-demand" at the Brisbane Archdiocesan website, and follow along by downloading the Order of Service.

That the Archbishop is a skilful preacher is evidenced by His Grace's first homily as the new Brisbane prelate, a transcript of which may be read here.

The Archbishop's Coat of Arms 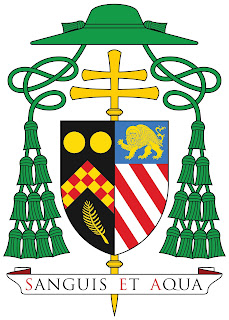 From the Order of Service:


"Archbishop Coleridge bears as his coat of arms his personal arms on the heraldic sinister (to the viewer’s right) impaled with the arms of the Archdiocese of Brisbane on the dexter and ensigned with the green galero (Roman hat) with ten fiocci (tassels) on each side to form a composite coat of arms which says, in the language of heraldry, Mark Coleridge, Archbishop of Brisbane.

The arms of the Archdiocese of Brisbane derive from the arms of Governor Sir Thomas Brisbane, Baronet after whom the city and the Archdiocese take their name.
The Archdiocesan arms are blazoned on a black field a chevron with a double line of alternating gold and red squares between, at the top, two gold plates representing stones, the instruments of martyrdom of Saint Stephen, Patron of the Cathedral, and, in base, the martyr’s palm of victory in gold.

The Archbishop’s personal arms are blazoned on a silver field, four red bends and on a celeste blue band at the top of the shield a gold Lion of Saint Mark.

The green galero with ten fiocci on each side is the traditional distinguishing feature of the arms of an Archbishop.

The double transverse cross is the processional cross, an heraldic entitlement of an Archbishop."

(The arms were designed by Richard d’Apice AM KCSG and Fr. Guy Selvester and illustrated by Sandy Turnbull.)

Brisbane is blessed indeed!
Posted by Kentish Man at 13:44