A while ago I came across news that Westminster Cathedral Choir were recording the Byrd Masses.  Well, the recording is now complete and the CD will be released for sale in September.  Go to the Hyperion website to hear some samples, and I'm sure you'll conclude as I have that this is not just another recording of the Byrd Masses.  First, the definition of the recording - it is superb.  Secondly, as far as I am aware, this is the first time a Catholic choir has recorded the three Masses.  I have grown up with legendary recordings like the Willcocks King's recording from the 60s, and have plenty more of the English cathedral/college choirs (Winchester under Hill, New College under Higginbottom, Christ Church under Darlington, John's under Guest, etc) and secular groups like the Tallis Scholars and the Cardinall's Musick.  To have the Masses now committed to disc by a Catholic cathedral choir is a momentous occasion.  Thirdly - wow, the choir is in great form and the phrasing typically exquisite from Baker.  Listen to the beginning Agnus Dei of the Mass for Five Voices and bathe in the beautifully austere singing of what appear to be single voices per part (I imagine the parts are augmented leading up to the third and climactic "Agnus Dei" section).  For Hyperion, too, this appears to be the first time they have released a CD of the Masses for Three and Four voices (Hyperion have two previous recordings of the Mass for Five Voices by Winchester Cathedral Choir under Hill and Westminster Abbey Choir under O'Donnell - the Cardinall's Musick recording of the Three Masses was recorded on ASV, before Hyperion took over that group's project of recording the entire Byrd repertoire). 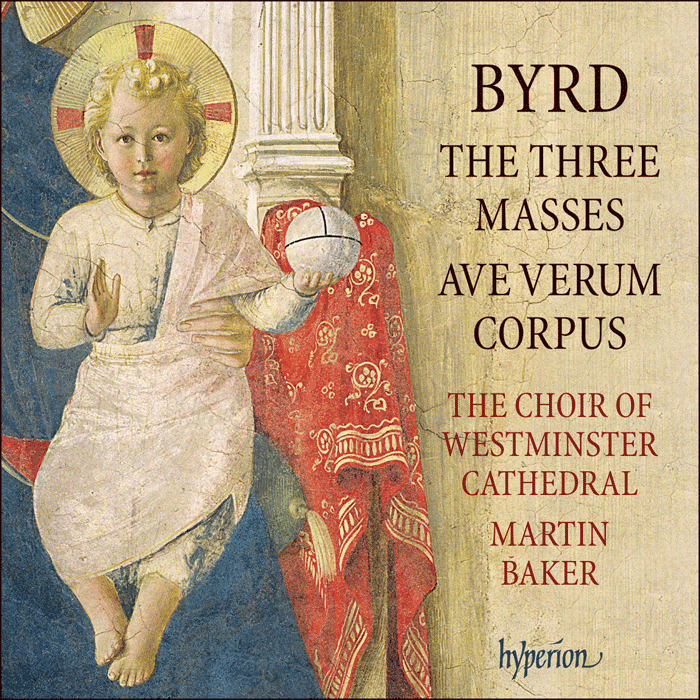