Click here for a video of the Episcopal Ordination of Vincent Long Van Nguyen at St Patrick's Cathedral, Melbourne on 23 June 2011.  His Lordship will serve as auxiliary bishop of the Archdiocese of Melbourne, under his Grace Archbishop Denis Hart.  He is the first Australian bishop of Asian extraction, having been born in Gia-Kiem, Vietnam.

The Ordination Mass was evidently a joyous occasion, and of particular interest is the use of the new dialogues and translations of the Ordinary.  The Missal chants are used to great effect, with the Archbishop superbly intoning his parts.  The congregation responded marvellously (perhaps due to the competent leadership of the celebrant and undoubted preparation for the Mass - nota bene).

Note: Australian parishes have been allowed by the Bishops' Conference there to use sung settings of the newly translated Ordinary (Gloria, Creed, Sanctus) plus the new responses at the Mystery of Faith since January 2011, and the rest of the new Order of Mass whether sung or said since Pentecost 2011. 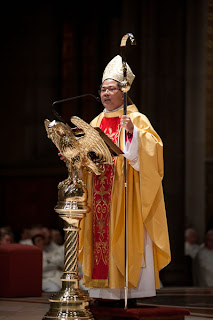