The book is now available to purchase for €25 at the new Solesmes website.  There is a discount of 50% for orders of 50 or more. 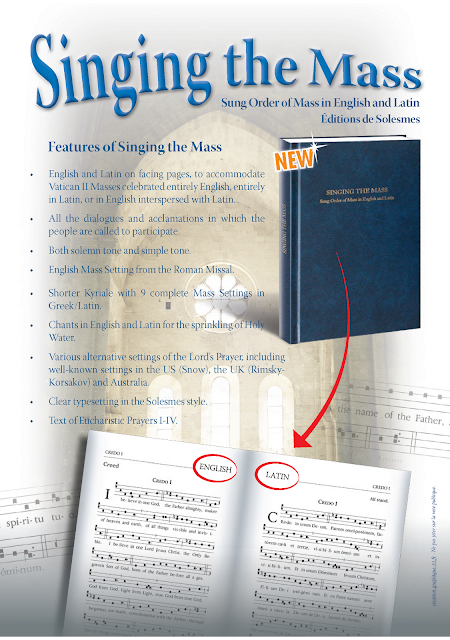 For further details about the book see this previous post.

The relevant part of the article is extracted below:


The dialogue between clarity and opacity [one presumes they mean 1973 v 2010, though many would argue the opposite in fact holds, at least insofar as the Sacred Mysteries are able to be expressed in words - ed.], or accessibility and mystery, will be played out on a religious stage again today with the publication of the new English translation of the Roman missal [sic], the fruit of long gestation in the Catholic church. When the Second Vatican Council called for [sic] the use of the vernacular at mass [sic], the first translators of the missal [sic] employed the principle of "dynamic equivalence" – the spirit and meaning of the text rather than word-for-word translation. In the interests of simplicity, some prayers were reduced to short, declarative sentences. The new translation celebrates "formal equivalence", a more literal rendering of the text. In Roman Catholic churches across the English-speaking world, the new missal [sic] will no doubt provoke outrage [?! - ed.] among worshippers who have grown used to the 1960s [sic] translation.

A televised Mass from Ireland using the new translation of the Roman Missal.

See the video on the RTÉ website here or here.