... worthy alone to be sung on this blessed night.

It is not yet commonplace for major liturgies in metroploitan cathedrals to be webcast live and then made available for viewing "on-demand". But St. Patrick's Cathedral in Melbourne appears to be blazing the trail - at least as far as the Antipodes is concerned.  Click here to watch this year's entire Easter Vigil.  The video is illuminating in various respects.  For example, this is the first Easter Vigil since the implementation throughout the English-speaking world of the new translation of the Roman Missal - and this meant many changes to the text of the prayers of the Vigil.  Then, we hear the new Exsultet - a real triumph of the new Missal.  Then we hear more chant - the Archbishop chanted almost everything!  Preface 1 of Easter with its two quilismas - excellent!!  This is a great example of how well the Novus Ordo Mass can be celebrated, and how the new Missal really assists in that endeavour.

Sydney's Easter Vigil was stunning too - the music list may be viewed here.  And from The Australian newspaper this wonderful photo from the Mass of Easter Sunday morning: 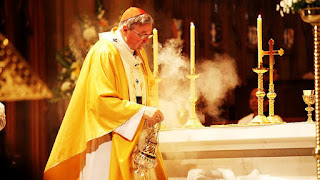 There are already plenty of resources available online to assist deacons, priests and cantors in preparing to sing the Exsultet in English from the 2010 Roman Missal.

One method which I consider may be helpful is to listen to the Latin original (from the 2002 Missale Romanum) to get a feel for how it should sound in practice (given that the 2010 English version is closely based on the beautiful Latin tone).  And here is a great recording from the Easter Vigil at St. Peter's last year, presumably taken from the 2002 MR:


You can follow along by downloading this Latin version from the 1970 Missale Romanum (I haven't compared it to the 2002 version - there may be some minor differences).

Then, you can practice by downloading the English 2010 version of the Exsultet in sqaure notation (this has apparently been prepared by a parish in Birmingham, UK, and was brought to my attention via the Chant Cafe).  Alternatively, download the Exsultet in modern notation exactly as it appears in the CTS Roman Missal by clicking here - this resource is made available by the Liturgy Office of England & Wales on the Roman Missal UK website.  You can find other reosurces for the Holy week liturgies there too.
Posted by Kentish Man at 14:38

“With few illusions about myself or the task that awaits me in Queensland, but with trust in the Lord who sends me, I pack my bags and head north once again.”

The next Archbishop of Brisbane - the capital city of the state of Queensland - will be the Most Reverend Mark Coleridge, biblical scholar, competent liturgist and previous Archbishop of Canberra-Goulburn (Canberra, although the Australian capital, is a much smaller city than Brisbane). 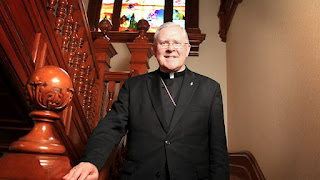 It is fascinating to see how much media interest there has been in this new appointment - as much in the mass media as in the Catholic press.

I have already posted the Archbishop's comments on the new translation of the Roman Missal - the speech he gave in Perth in 2010 is particularly interesting.  I thought it might also be apt to quote at length from his 2008 "Pentecost Letter on the Liturgy":

“In this next phase of the ongoing journey of liturgical renewal, some things are clearly important.  Among the more important are the following:
Much has been achieved in the journey of liturgical renewal since the Second Vatican Council, but there is still much to be done.  Without abandoning the gains of recent decades, now is the time to take stock comprehensively, with our eye firmly fixed on both pastoral need and liturgical tradition in the way presumed by the Council.
At times when my own spirits have flagged in what I am doing to help the Church move through this next phase of liturgical renewal, I have thought to myself that what we are doing – what we are all called to do now – is to prepare an Upper Room where the Lord can celebrate the Passover.  In the Gospel, Jesus asks, “Where is my guest room where I may eat the Passover with my disciples” (Mark 14:14); and in shaping the liturgy we are providing the Lord with an answer – “a large room upstairs, furnished and ready” (v. 15).  The room must be large because all the disciples will gather there: the liturgy is for everyone.  Moreover, in all our efforts to renew the liturgy as the Church requires, we are seeking to ensure that the room is “furnished and ready”.  Much has been done to prepare the room, but there is still much to be done to ensure that it is fully furnished and ready for the feast.
The Passover is also the Wedding Feast of the Lamb who has taken to himself his Bride, the Church.  We are planning the banquet which celebrates the marriage of heaven and earth.  In all the work now being done on the Missal, we are providing the Church with words.  We are looking for the right words to place on the lips of the Bride as she speaks in love to the Bridegroom.  But it involves more than words, however important they may be.  We are looking for rituals and symbols, for songs and gestures, for buildings and furnishings, vestments and vessels, all of which will be worthy of the Wedding Feast of the Lamb.”

According to the archdiocese of Brisbane, the new Archbishop's principal areas of focus will be "liturgy, teaching of faith to the young and of encouraging vocations to the priesthood and religious life."

I have said before that the Church in Australia is in a great state of flux at present, and the ramifications of this appointment will no doubt be profound.
Posted by Kentish Man at 13:58