Listen to the Holy Father make his announcement in Latin. 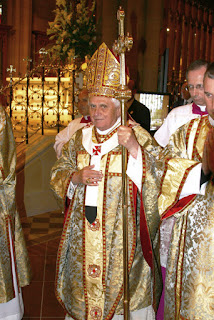 
Pope Benedict XVI says he will resign on February 28 because his age prevented him from carrying out his duties, an unprecedented move in the modern history of the Catholic Church.

He is the first pontiff to do so in nearly 600 years and the decision sets the stage for a conclave to elect a new Pope before the end of March.

The 85-year-old Pope announced his decision in Latin during a meeting of cardinals on Monday morning.

"After having repeatedly examined my conscience before God, I have come to the certainty that my strengths, due to an advanced age, are no longer suited to an adequate exercise of the Petrine ministry," the Pope told the meeting.

"In order to govern the bark of Saint Peter and proclaim the Gospel, both strength of mind and body are necessary, strength which in the last few months, has deteriorated in me to the extent that I have had to recognise my incapacity to adequately fulfill the ministry entrusted to me," he said.

"For this reason, and well aware of the seriousness of this act, with full freedom I declare that I renounce the ministry of Bishop of Rome, Successor of Saint Peter, entrusted to me by the Cardinals on 19 April 2005, in such a way, that as from 28 February 2013, at 20:00 hours, the See of Rome, the See of Saint Peter, will be vacant and a Conclave to elect the new Supreme Pontiff will have to be convoked by those whose competence it is," he said.

Pope Benedict had hinted in a book of interviews in 2010 that he might resign if he felt he was no longer able to carry out his duties.

The last Pope to resign was Pope Gregory XII, who stepped down in 1415 in a deal to end the Great Western Schism among competing papal claimants.Benedict called his choice "a decision of great importance for the life of the church."

The move sets the stage for the to hold a conclave to elect a new pope by mid-March, since the traditional mourning time that would follow the death of a pope doesn’t have to be observed.

There are several papal contenders in the wings, but no obvious front-runner as was the case when Benedict was elected pontiff in 2005 after the death of Pope John Paul II.

And see the London Telegraph's report.

One commentator says: "He will be intensely missed by those of us for whom he was, in his quiet way, the most inspiring Pope of our lifetimes."  Quite so.  There has been a radical brilliance about Pope Benedict and his papacy that makes his departure in this way rather apt.

Another commentator says: "I can only say that from the bottom of my heart, I am grateful. This good priest and bishop, who tried to resign from the CDF multiple times, who has not been able to retire, put himself at our constant service for seven years, "a humble worker in the vineyard of the Lord." The changes he has made for all of the Church will have lasting importance, perhaps in no other field as much as liturgy. He has given us an example of humility and goodness that could have no possible origin other than saintliness. I will miss him, and I am grateful."
Posted by Kentish Man at 12:08