Nestled away in the "Other Pontifical acts" section of the Vatican Information Service on Saturday (22 September 2012) was this piece of information of interest to Antipodeans and the wider Catholic Church:

"The Holy Father appointed: ...
Cardinal George Pell, Archbishop of Sydney, Australia, as a member of the Congregation for Bishops."


This means that Cardinal Pell will be asked to opine on the suitability of episcopal candidates. Together with with those of the other members of the Congregation, his Eminence's views as to the best candidate for a particular diocese shall be conveyed to the Pope, with the Holy father usually accepting the majority recommendation. 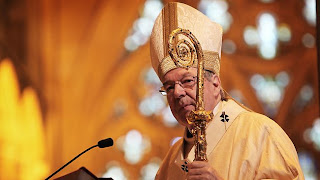 The Ordination is due to commence at 14.30 BST in the Cathedral of St John the Evangelist, with processions starting at 13.30 during which there will be the following choral and organ music:


Praise to the Holiest in the height, Bl. John H. Newman


Introit Salve Sancte Parens (listed in the Order of Service but not in fact sung due to the altar being incensed while the hymn, above, was still being sung). Given the new Bishop's views on Gregorian chant (see below), one can only imagine that he will establish a schola cantorum to sing in praise of God in the best traditions of the Roman Rite; to sing in a manner worthy of the Cathedral of which he is now in charge. The special choir formed for the celebration (with singers drawn from the parishes of Portsmouth) answered that description, so it is possible.

Gospel sung in its entirety.

Preface was sung in its entirety, as were the words of consecration, according to the Missal tone, naturally. However, the Mystery of Faith was from the aforementioned Community Mass.  I've posted on this issue before, and this Ordination Mass provides another prime example of why the Missal acclamations at the Mystery of Faith should be preferred above all others.

In his address before the conclusion of the Mass, the new Bishop expressed his hope to be a humble, holy and orthodox Bishop.

On music, the Bishop wrote, in the Order of Service:


"I have tried to incorporate some of the plainsong chants for the feastday. Gregorian chant is always the 'native' music of the Roman Rite and the Church encourages us to give it pride of place in the liturgy (General Instruction of the Roman Missal 41), along with the use of the Latin language, especially in large-scale celebrations (Sacramentum Caritatis 62). I hope we will all rediscover the beautiful treasury of chant. With its changing moods and lilting melodies, it expresses so eloquently the prayer and affectivities of the human spirit in the presence of the Transcendent God.

In our post-modem culture, it is also critically important to incorporate other musical styles too. I have chosen parts of the Mass setting from A Community Mass by the celebrated North American composer Richard Proulx (d. 2010). It has great solemnity with interesting harmonies and rhythms. We will also sing some classic hymns: Blessed John Henry Newman's 'Praise to the Holiest', and two Marian hymns, '0 purest of creatures' and at the end 'Hail Queen of Heaven' by Fr John Lingard (d. 1851). During Holy Communion we will sing two pieces linked to the sacred realities symbolised by the episcopal coat of arms: Psalm 41, 'Like the deer that yearns for running streams', in a setting by Dom Gregory Murray (d. 1992) and 'Sweet Heart of Jesus', the latter a favourite of Canon Paddy Healey, my first parish priest when I was assistant at St Anthony's, Woodhouse Park. Please remember him at Mass today, as it is the first anniversary of his death."

Portsmouth Ordination to be broadcast on excellent new website

The ordination to the episcopate of Monsignor Philip Egan will be webcast at this site at 13.30 (British Summer Time) this Monday 24 September (the actual Ordination will commence 1 hour later, but is preceded by various processions during which choral music will be sung - see my post above for details and to download the Order of Service).  The Monsignor will become the eight bishop of Portsmouth.  The current Archbishop of Westminster, the Very Rev Vincent Nichols, will be present, as will his predecessor, Cardinal Cormack Murphy-O'Connor (who was also, incidentally, once the bishop of Portsmouth). The Ordaining Bishop will be the outgoing Bishop of Portsmouth the Right Rev Crispian Hollis, assisted by the Archbishop of Southwark, the Most Rev Peter Smith and the Bishop of Shrewsbury, the Right Rev Mark Davies (the Bishop-elect was from Shrewsbury).

The website hosting the broadcast - ChurchServices.tv - is actually quite amazing.  Masses from across the UK and Ireland may be viewed live, and watched again on demand (and even downloaded).

This really is a commendable service for those unable to make it to Mass (it would be particularly useful in places like nursing homes and hospitals, and even schools as the peerless UK Catholic Herald reports).  It is also a significant resource for those interested in liturgical affairs.  For example, it is possible to see the degree to which the Mass is sung in different places, and to see which Churches (particularly Cathedral Churches) have a dedicated schola cantorum to sing the Liturgy in the best traditions of the Roman Rite, as very strongly encouraged by the Second Vatican Council.  The Cathedral of St Peter in Belfast established one very recently, admirably showing that it is never too late to set things right.  You can hear them sing at the 11 o'clock Mass at the Cathedral every Sunday. And here is a video of the Choir singing the Schubert Mass in G for Easter 2010 (broadcast from the Cathedral via RTÉ):


BBC Northern Ireland has also made a documentary about the Choir.
Posted by Kentish Man at 08:13

It is now possible to acquaint oneself with the liturgies at Köln Cathedral by watching the domradio broadcasts from there of important celebrations throughout the Church's year, uploaded either to the domradio or to the Cathedral's own youtube channel.

And here is the resident liturgical choir singing at the Mass of Easter Sunday (in this video of the whole Mass there is the Easter Introit, Latin Chant Greeting, Confiteor and Collect, Rheinberger's Cantus Missae and much more that commends itself to one).

The famous Vienna Boys' Choir (VBC) is this week embarking upon a lengthy tour of the Antipodes. The tour, which should prove to be very popular, is being marketed in a thoroughly modern fashion:

See also here. The choir is seeking to include two Australian members.

The VBC is similar to the Vienna Mozart Boys' Choir (VMBC), apparently established in 1936 by a former choirmaster of the VBC.  It was the VMBC that, during a world tour, was stranded in Australia at the outbreak of WWII, and that ultimately formed the first boys' choir at the Cathedral of St Patrick in Melbourne. A programme from that tour states:


"For more than 500 years the Boys' Choirs have been the pride of cultured and music-loving Viennese people, maintaining a tradition of polyphonic singing unsurpassed anywhere in the world. As Viennese Choirboys Haydn, Mozart, Schubert, Richter and many other famous musicians received their training and earliest inspiration".

In a rather tongue-in-cheek review, The Chicago Tribune asserted that "they put the birds to shame", and the New York World Telegram gushed "One actually suspected the angels must sing thus ... The audience was enchanted with the entire programme" (clearly this was an age when it was not a hangable offence for journalists to use the impersonal pronoun "one", and when "British English" spelling prevailed across the pond - unless of course there was some judicious editing of the quotes for the programme so as not to offend the sensibilities of the Antipodean audience!).


One intriguing aspect of this tour is that the VBC will be singing a specially commissioned piece, by Uzbekistani-Australian composer Elena Kats-Chernin, based on one of 's most well-known poems - My Country by Dorothea Mackellar (the one the second stanza of which starts "I love a sunburnt country, a land of sweeping plains ...").