I have been searching for a decent recording of the English arrangement of Rimsky-Korsakov's setting of the Lord's Prayer. My understanding is that it was first adapted to French (possibly by Père Gelineau) and later into English by then Precentor of Westminster Cathedral, one Father Higgins.

And then two excellent versions present themselves in quick succession. The first, fittingly, comes from Westminster Cathedral itself, during Vespers recorded for the BBC in 2014. The second comes from Winchester Cathedral, during the Easter Sunday Service in 2010 (only recently making its way onto YouTube). The Winchester version differs in two respects: the first syllable of the word "against" is sung on a different note, and the doxology ("for Thine is the kingdom" &c.) immediately follows the Lord's Prayer (as is customary in the C of E) and is set to the same tone.


Whilst I am greatly enamoured of this English setting, the first preference for a sung setting at a (Latin Rite) Mass should always be the normative Latin version. Next in order should be one of the other settings from the Roman Missal: the Mozarabic or Solemn Anaphora tone (Latin or English), or another approved vernacular version. For the English speaking world, the Missal contains an excellent adaption of the normative Latin tone, or in the US there is a setting by Robert Snow. In Australia, an adaption of the normative Latin tone by Rev. Dr. Percy Jones dating back several decades continues to be used, with the approval of the Bishops' Conference (although unlike the US situation, this Australian setting never made its way into the Roman Missal). The Australian version can be downloaded here, typesetting and organ accompaniment by Dr. Geoffrey Cox.

I like the idea of the Rimsky-Korsakov setting being used at Vespers, where Vespers is not in Latin. I am a little intrigued, however, that an English setting is used for Vespers at Westminster, given that the Pater Noster is common place there. Still, we otherwise wouldn't have the first recording above!

While I am on the topic of the Lord's Prayer, I should add that while the Pater Noster is included in the English version of the Roman Missal, Third Typcial Edition, its Latin introduction (Praeceptis salutaribus moniti &c.) is not. In my view, the Latin introduction should always be used if the Pater Noster will follow, if for no other reason than to indicate to the people that it is the Latin version that will be sung/said. Unfortunately, the whole of the Order of Mass in Latin, while an appendix in the 1974 version of the English Roman Missal, was actually omitted from the most recent version which is a pity because very few versions of the Latin Missale Romanum are floating around the parishes.

I hope in coming days to opine on Cardinal Robert Sarah's recent editorial in L'Osservatore Romano regarding the Mass, and also on the tone to be used at the Gospel (I have finally discovered a source for the parochial version used in Sydney, but am still perplexed as to why it remains in use - I will explain, based on my research to date, why this is).
Posted by Kentish Man at 07:50 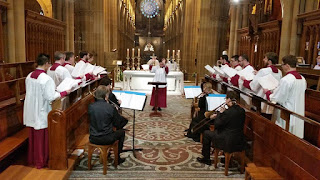 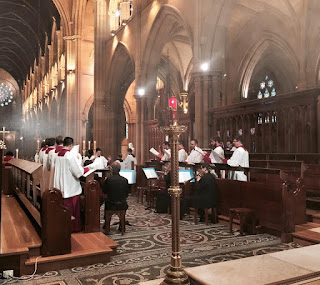 Photos are care of the Cathedral staff.

The Palestrina Missa O Sacrum Convivium is one of the finest in the canon - I fell in love with it after hearing the recording by the Choir of Christ Church Oxford made when the choir was on top form (see if you can track it down on Amazon either as a single CD or as I did as part of the choir's collected volumes under the title "European Choral Music"). Here is a taste, care of YouTube.


Splendid music, with an unexpected brass embellishment, followed by a successful Corpus Christi procession (which for the first time in many years took place under brilliant blue skies).