This is a concert notice for Treasures of the Spanish Renaissance, to be performed by the Choir of Westminster Cathedral directed by Martin Baker at 19.30 on Wednesday 25 May 2016 (at the Cathedral). At 17.30 today, Tuesday 24 May 2016, Mr Baker will be interviewed on BBC Radio 3 In Tune to discuss the concert and the Cathedral Choir's CD of Alonso Lobo's music which is due to be released on 27 May 2016, excerpts of which may be found on the Hyperion website and YouTube . The audience at tomorrow night's concert will be able to purchase the CD two days prior to the official release. Tickets are £20 and the CD is likely to be between £10 and £15.

Update: If you click on the link above to the BBC In Tune programme you can listen to interview with Martin Baker on demand for the next 29 days as at writing (23.13 BST 24 May 2016). The interview includes two full tracks from the new Lobo CD - Jerusalem, Jerusalem from the Lamentations, and the Kyrie from the Missa Maria Magdalene.

"A controversial record, then; but it is certainly one that all lovers of late Renaissance church music ought to hear."

So ended one of Gramophone Magazine's reviews of Treasures of the Spanish Renaissance, a significant contribution to the catalogue of polyphony from Spain's Siglo de Oro, recorded by Westminster Cathedral Choir under David Hill in 1985 and released the following year. 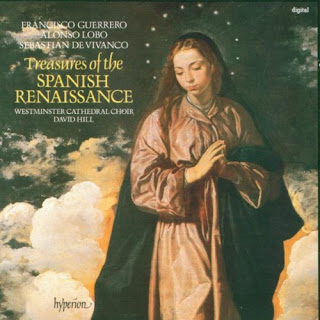 "... the recording ... tries its best to unravel the multiple ... strands of the part singing and at the same time blend in proper amounts of the accompanying instrumentalists and the impressive reverberation of the Cathedral itself. On the whole it succeeds, now and again with some distinction."

Even as late as the mid 1980s, the "early music" movement at this point in full swing, sacred works by renaissance composers other than Victoria and Morales were in relatively short supply. Hence the importance of a new record that highlighted the brilliance of composers such as Francisco Guerrero, Alonso Lobo (one of Guerrero's students) and Sebastian de Vivanco. Gramophone's reservations about the execution of some of the pieces notwithstanding, this disc remains a benchmark from which all other recordings of similar works can be judged. The full track listing is:

It is partly in celebration of this momentous disc, and partly to herald its new disc exclusively (with one exception) dedicated to the work of A Lobo, that Westminster Cathedral Choir will this Wednesday 25 May 2016 give a concert with the same title as the 1985 recording, though apart from works by Guerrero, A Lobo, and Vivanco there will be two by Victoria (whose magnificent eight part Ave Maria will conclude the concert - click here to listen to Westminster Cathedral Choir singing part of this work at St Peter's Basilica in Rome a few years ago). 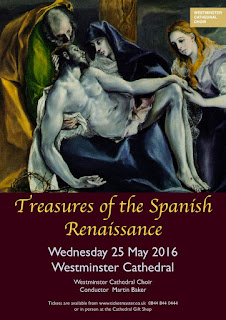 The full programme is:

The audience will have the privilege of being able to purchase the new CD a few days in advance of its official release. Sound samples are already available on the Hyperion Records website (and quite probably on other sites) as well as on YouTube. 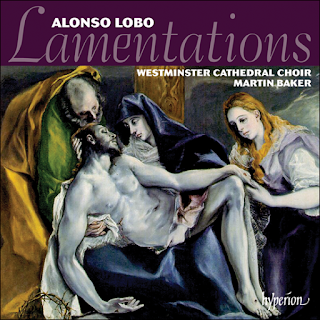 The track listing is:

It is slightly odd that the title of the forthcoming disc only refers to the Lobo Lamentations, given the presence of the Missa Maria Magdalene (a parody Mass based on the Guererro motet Maria Magdalene Et Altera Maria). One can hazard a guess that this was to distinguish it from the Tallis Scholars CD of the Mass and Guerrero motet, though there is certainly no shame in replicating this repertoire especially as the Tallis Scholars disc appears to be the only other recording of the Mass (the Cardinall's Musick have recorded the Guerrero motet though it is a less than satisfying performance - unlike the rest of that particular disc).

The Tallis Scholars disc of Lobo is notable for its crystal clear articulation and perfect arching passages. Despite its significantly larger size, the Westminster Cathedral Choir definitely has the capacity to replicate such clarity of sound while also adding the ethereal dimension for which the British cathedral and college choirs are celebrated. Early indications from the samples already made available are that we will be treated to some fine singing and that at the very least the Westminster Cathedral CD will compare favourably to the Tallis Scholars disc.

One further point to make is that for the recording of the Choir's last CD, the acclaimed disc of The Byrd Masses, the Choir was apparently arranged in a square formation in the vast Sanctuary below the high altar. This was perhaps to overcome some of the problems associated with making recordings from where the choir usually sings for Mass (high up in the Apse), sometimes causing what I describe as the "washing machine" effect when the separate parts can become indiscernible. For this latest recording, it sounds like the choir may well have adopted a similar technique, such is the apparent clarity of the part singing.

I must say, having just visited this music's country of origin where it is sporadically performed at best (and then almost never at Mass or Vespers), it is reassuring to return to the UK where this music continues to live on in both the context for which it was intended as well as in the concert arena. Hence let me renew this blog's admiration of and appreciation for the many people involved in keeping sacred music alive and well in the 21st century. 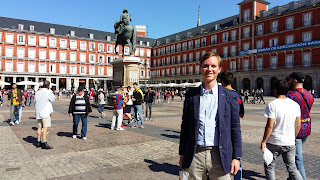 Your humble scribe files this report from Madrid

Queensland is the second largest state by land mass of the Commonwealth of Australia. Its tropical and subtropical climates create warm, humid conditions for much of the year, and make the state prone to cyclones.

The majority of its inhabitants reside along the vast eastern coastline that stretches for some 3,000 kilometres (1,900 miles).

Brisbane, its capital city, sits at latitude 27.4710° S, longitude 153.0234° E, placing it at the far south-eastern corner of the state. Much of its charm is derived from it being situated on the Brisbane River, a sizeable, navigable freshwater channel, albeit a progressively salty one as it flows headlong into the expanse of the Pacific.

In recent years, the Catholic climate in Queensland has been somewhat tempestuous - or perhaps rather more aplty, cyclonic. Doctrinally seen as falling (in many cases, well) short of what, as a crude generalisation, may be described as Catholic orthodoxy (whatever that may currently mean), and liturgically scarcely better, Queensland Catholicism was very much lying enfeebled in a field hospital.

The appointment in 2012 of Archbishop Mark Coleridge to Brisbane marked a turning point on both fronts. On the liturgical front, with which this blog is primarily concerned, His Grace took swift action to bring the Masses at St Stephen's Cathedral more sharply into line with Catholic tradition, as espoused continuously from Pope St Pius X, through the documents of the Second Vatican Council, and even in the constituent documents of the papally legislated Novus Ordo Missal (a point put beyond any doubt by the masterful Pope Benedict XVI).

Chant and polyphony and other music fit for the Mass and the Divine Office (in other words, music that is unmistakably sacred in nature), often sung in the Latin Rite's universal, mother tongue, are now being given pride of place in worship at Brisbane's Catholic cathedral.

The cathedral's three choirs - the Cathedral Choir of men and boys, the Cathedral Schola of professional men and women, and the St Stephen's Chorale - come under the purview of the cathedral music department which was led by well respected Director of Music Dr Ralph Morton until his untimely death earlier this year. Mr James Goldrick was appointed Assistant Director of Music in 2014. Mastro Goldrick, a New South Welshman, studied at the University of Newcastle (NSW), and has previously held roles as organ scholar at Christ  Church Anglican Cathedral in Newcastle (NSW) and St Mary's Catholic Cathedral in Sydney.

Maestro Goldrick brings a wealth of musical talent as organist and choral director, and a keen appreciation of and sympathy for the musical patrimony of the Latin rite. This is demonstrated none more so than in the introduction, presumably at his initiative, of a regular solemn choral vespers at St Stephen's. A recording of one such service made on Sunday 7 February 2016 may be viewed below.

Also see this page for on demand videos of past Solemn Masses. And visit the cathedral's Facebook page for music lists for the 10 am and 12 pm Sunday Masses and 3 pm Vespers. For Pentecost 2016 you will hear:

This blog congratulates Maestro Goldrick for his role in the critically important work to revive Catholic liturgical/musical patrimony in Northern Australia, and notes the not insignificant impact that the earlier restoration in Sydney, facilitated by Cardinal Pell and carried so expertly into effect by Maestro Thomas Wilson and his team, has had in the developments further north.