Recall that for the Feast of Saints Peter and Paul, the Choir of Westminster Abbey, whose Director is James O'Donnell, shall sing at Holy Mass jointly with the Cappella Sistina.  The booklet for the Papal Mass may be downloaded here.  Curiously, the said booklet makes no mention of the visting choir - perhaps a separate booklet is being produced for the occasion.

A press release from the Abbey illuminates the picture somewhat:

“The combined choirs will sing music from the Roman tradition including movements from Palestrina Missa Papae Marcelli and the motet Tu es Petrus, and the Abbey Choir will also sing music from the English choral tradition, including music by Byrd Ave verum corpus and Laudibus in sanctis, Tallis Loquebantur variis linguis, and Purcell I was glad.”

Read together with the said booklet, the parts of the Ordinary that will be sung from the Papae Marcelli Mass are the Gloria and the Credo, with the Kyrie, Sanctus and Agnus Dei from Mass VIII (De Angelis) (not Mass IV, which the Vatican guidelines on chant stipulate for use on Feasts of the Apostles).

Some general thoughts.  The Abbey choir has made a recording of the Papae Marcelli Mass, so this is quite within their existing repertoire, and is regularly sung by the Cappella Sistina.  It seems that the Abbey Choir will sing the Byrd, Tallis and Purcell without the assistance of the Cappella Sistina, one reason being that those composers' works are not part the latter choir's usual repertoire.  I do so hope that it all goes well - any collaboration that furthers the cause of good quality sacred music in praise of the Almighty is to be welcomed.  Or as Colin Mawby recently put in in Oremus, the Westminster Cathedral periodical, liturgical music is in the first place an "act of prayer" - to see and hear these two choirs singing the Church's liturgy together will be a very magnificent thing.

The Abbey Choir has already given a concert this week in Rome, on Tuesday in the Basilica of Santa Maria Maggiore: 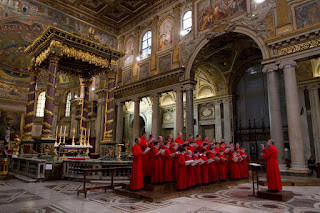 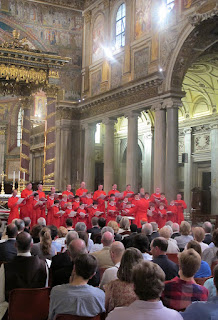 The Feast of Peter and Paul is, of course, also the occasion on which new Metropolitan Archbishops have their woollen pallium "imposed" upon them.  The two representatives from the Antipodes are the newly enthroned Archbishops of Perth, the Most Reverend Timothy Costelloe, and of Brisbane, the Most Reverend Mark Coleridge.  Brisbane's Pallium is made from ‘Bullamalita’ superfine ram’s wool, a gift from his Grace's previous (non-Metropolitan) See, Canberra-Goulburn.

I notice that the Cappella Sistina's website has a link to my blog regarding the concert given by the Sistine Choir at Westminster Cathedral earlier this year!  Greetings and all the best for your collaboration with the Abbey Choir this Friday! 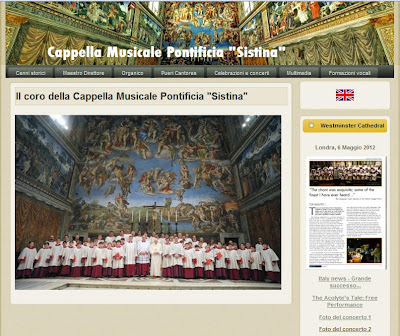